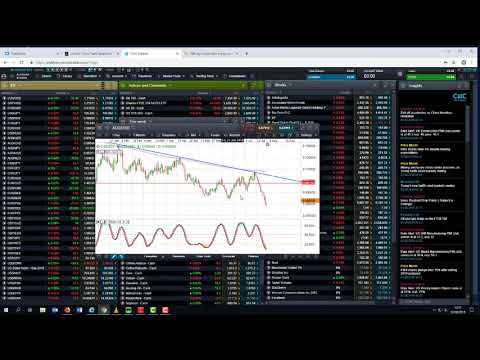 Watch our week ahead video preview, read our pick of the top stories to look out for this week (5-9 August), and view our key company earnings schedule.

Chief market analyst, Michael Hewson, looks at the recent sell-off in global equity markets and the effects of the latest escalation. He also looks ahead to the latest UK Q2 GDP numbers, RBA rate meeting, Canada payrolls and the latest numbers from Lyft and Uber.

Global services PMIs
Monday: Despite the prevailing doom and gloom, the services sector has so far avoided being dragged down by the woes of the manufacturing sector. That may change in the medium term if there is no evidence of a pick up after a weak first half of the year. Expectations are that the services sector will continue to outperform, however one needs to be mindful of any signs that we could start to see a slowdown here.

HSBC half-year results
Monday: When HSBC reported its latest quarterly numbers in May, it only served to reinforce its position as the UK’s biggest and most profitable bank. Quarterly profits after tax jumped by 31% to $4.9bn, with revenue up by 5.2% at $14.4bn from $12.7bn a year ago. The HSBC share price performance since then has been fairly unremarkable, with shareholders more concerned about a 3.2% rise in operating costs and net interest margins which remain well below its more UK-centric peers.

RBA rate meeting
Tuesday: Concerns about a slowdown in China are likely to dominate the thinking of the RBA, given how closely the Australian economy’s fortunes are geared to the growth cycle there. Expectations are rising that they will cut rates this week, despite an admission by RBA governor Philip Lowe that further easing was unlikely to have much effect, particularly if other central banks act in a similar fashion.

Rolls Royce half-year results
Tuesday: A hallmark brand for UK PLC, Rolls Royce has had a turbulent few years. Management have embarked on a turnaround plan after the company’s share price hit a low of 497p in 2016. Since then, new CEO Warren East has managed to execute a strategy that has seen underperforming areas trimmed back, and turned the business focus to key growth areas of civil aviation and maintenance. Earlier this year the company announced a surprise £2.9bn loss due to costs involved in fixing problems with its Trent 1000 engines, which power the 787 Dreamliner. These problems could continue to hamper profitability going forward. The decision by Airbus to stop production of its A380 aircraft also saw a charge of £186m. The underlying business numbers were more positive, as operating profits rose 71% to £633m, and management will be hoping that this continues while they work through cutting costs further.

Disney Q3 results
Tuesday: The performance of the Disney share price in recent months is testament to the high expectations around the launch of its new streamlining service, Disney+, which is due to launch on 12 November. The shares are up over 30% in the last six months. At a cost of $6.99 a month, it appears deliberately designed to undercut Netflix’s pricing model. The biggest problem Disney will have, in what is becoming an increasingly crowded and fragmented market, is one of limited consumer appetite for multiple subscriptions. This isn’t likely to be too big a problem in the short term, given the company’s multiple revenue streams from its theme parks as well as the acquisition of Sky, which suggests that in the short term they might look to use it as a loss leader, to squeeze the competition.

Lyft Q2 results
Wednesday: After a rocky start, Lyft shares have stabilised since falling as low as $47 in the wake of their $70 IPO launch in April. When the company reported in May for Q1, we did see a marked improvement in revenue, which came in at $776m. The company announced that they expected to see a further improvement in Q2 to over $800m. Lyft also posted a loss of $1.1bn for Q1, though most of that was down to IPO costs, as operating losses stayed steady at $211.5m. For the recent share price rally to be sustained there needs to be evidence that the company has stopped haemorrhaging cash, or we could see the recent recovery dissipate quite quickly.

Cineworld half-year results
Thursday: The decision last year to expand into the US was widely perceived to be a high-stakes gamble, particularly given that the cost of acquiring Regal Entertainment was on the high side at $3.6bn, and the company was also in the middle of refurbishing its cinema real estate in the UK. The jury remains out, if the performance of the share price is any guide. This also helps explain the decision in May to sell off and lease back 17 of its US-based cinemas over a period of 15 years, for the sum of $286.3m. The company will be hoping that an increase in footfall prompted by the release of a slate of new titles will help boost turnover at a time when the UK economy has slowed during Q2. The release of new films like Aladdin, sequels to X-Men, Men in Black and Toy Story, not to mention The Rise of Skywalker, the latest film in the Star Wars saga at the end of this year, will be key in meeting guidance expectations for the rest of the year.

Uber Technologies Q2 results
Thursday: It’s set to be a big quarter for Uber, its first as a publicly listed company and another tech company that is haemorrhaging cash at a rate of knots. However, its share price has gradually recovered from the big falls seen in the wake of its IPO in May. It priced at the lower end of its $44 to $50 IPO range, and the shares dived to as low as $36 before slowly clawing those losses back. Whatever the reasons for the recovery, the numbers don’t lie, and suggest that the company is a long way from being profitable. The business has continued to grow, last year it reached 91m users, and generated $9.2bn from its ride hailing business. Its food business also saw a 149% rise in revenue to $1.5bn. However with losses at $3bn last year, and the company laying off 400 people in the past month, there must be concerns as to whether it will ever get close to making a return for its shareholders. Expectations are for a loss of $2.33c a share.

UK Q2 GDP
Friday: The outlook for the UK economy is likely to have deteriorated in the second quarter from the outperformance we saw in Q1. There are a number of reasons for this, one of which was companies bringing forward their inventory building ahead of the 29 March Brexit deadline. These actions shifted economic activity from April and May,  and was reflected in some weak PMI readings in the aftermath. We also saw a bit of an uptick in inflation which crimped consumer spending, however there does appear to have been a bit of a pickup in some of the June numbers. This might not be reflected in this week’s preliminary numbers, so we could see a weaker reading than is expected. These expectations vary from -0.1% to 0.1%, down sharply from the 0.5% in Q1.

Canada non-farm payrolls
Friday: After a slow start to the year the Canadian economy has seen a decent pickup in the second quarter. In the past two months we’ve seen the Canadian jobs market undergo a bit of a renaissance, with unemployment falling to 5.4% in May, a multi-year low, while wages have also started to push higher at their fastest rate since March 2018. We’ve also seen a recovery in consumer spending which augurs well in terms of the overall economy. In the last six months payroll numbers have seen decent gains in full-time employment, apart from March which saw a minor decline. This is a trend which, if continued, is only likely to be a concern for the Bank of Canada if it starts to push up the exchange rate, particularly if the US Federal Reserve starts cutting rates.