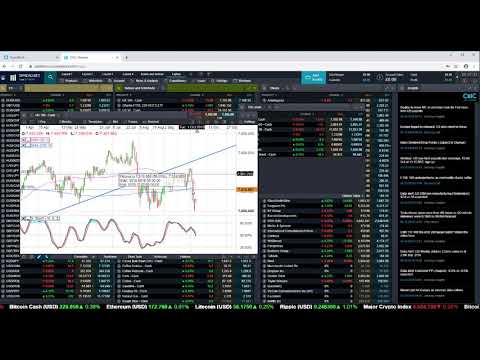 Watch our week ahead video preview, read our pick of the top stories to look out for this week (7-11 October), and view our key company earnings schedule.

Chief market analyst, Michael Hewson, looks at the latest declines in stock markets this week, and some key support levels on the FTSE 100, DAX, S&P 500 and Dow. He also looks ahead to the restart of US-China trade talks, the latest China trade numbers and Fed minutes, as well as possible changes in Fed guidance.

China trade balance (September)
Tuesday: A lot of the recent numbers we’ve seen out of Asia in the past two weeks have shown that both Japan and South Korean exports slid sharply. This doesn’t bode well for the latest China trade data, particularly since the bulk of US tariffs are now likely to be showing up in terms of costs. Recent Chinese trade data has shown that exports away from the US have improved, which has offset some of the damage, however we still saw a 1% decline in August. In terms of imports the picture is more worrying, as every month this year has seen big declines, with the exception of April which had a rise of 4%. The last two months have seen declines of 5.6%. There has been some improvement in the recent PMI data, and there’s hope this might get reflected in the latest trade data for September, as the Chinese economy absorbs the latest rate cuts and stimulus packages.

easyJet Q4 results
Tuesday: The travel sector has been in the news a lot this year, with the difficulties faced by airlines like Flybe and Air Berlin being cases in point. Norwegian Air has also seen several problems, faced with a difficult operating environment for the budget sector. Even Ryanair has been feeling the pinch, having to cut its profit forecasts on a number of occasions over the last 12 months. The collapse of Thomas Cook may offer some respite in that regard, though it may have happened too recently to be reflected in this quarter’s numbers. At its most recent update in July, revenue saw an increase of 11.4%, despite the company having to set aside £15m because of the Gatwick drone incident. At that update, management said they expected capacity to rise by 0.7% in H2, and for headline profits before tax to come in between £400m and £440m for the current fiscal year. In light of events at Thomas Cook, it will be interesting to see if management feel confident about raising that target higher?

Levi Strauss Q3 results
Tuesday: When Levi Strauss IPO’d earlier this year it was one of those rare beasts, namely a new issue that was profitable, with a tried and trusted business model. Despite this, its share price performance has been underwhelming, currently trading just above its IPO price. When the company reported in Q1, profits came in at $146.6m or $0.37c a share on revenues of $1.44bn, with sales strong in both the US and Asia markets. In Q2 the company stumbled due to the costs of its IPO. It missed profit expectations by $0.05c a share, coming in at $0.07c. Revenues were better than expected with growth in all of its major regions. The company was at pains to maintain its full-year outlook, with expectations for Q3 to see a profit rise to $0.28c a share.

Federal Reserve minutes
Wednesday: The most recent Fed decision turned out to be a rather contentious one. While a rate cut was widely expected, the level of dissent in terms of the divisions on the committee was not. Dissents came from the hawkish as well as the dovish side, with both Esther George of the Kansas City Fed and the Boston Fed’s Eric Rosengren pushing back against the cut, like they did in July. James Bullard of the St. Louis Fed argued for a deeper move of 50bp. With the FOMC so split, this week’s minutes should give an insight into how much deeper the divisions go with regards to further rate cuts in the months ahead, particularly since the Fed statement didn’t differ that much from the one in July. We could also get an insight into how Fed policymakers viewed the current concerns over the repo market.

US-China trade talks restart
Thursday: At the time of writing, the US and China are expected to restart trade talks in Washington, with Chinese vice premier Lie He due to lead a Chinese delegation. The bigger question will probably revolve around where the starting point is likely to be. Earlier this year talks broke down when they were, in the words of the US treasury sSecretary, “90% done”. Does that mean that they can be picked up where they left off, or are we starting from scratch?

OnTheMarket half-year results
Thursday: The UK property market has been at the epicentre of a significant amount of disruption in recent years, with companies like Purplebricks and Zoopla disrupting the traditional model. The launch of OnTheMarket in 2015 has been part and parcel of this, and the recent slowing in the housing market has affected margins and revenues across the entire sector. Today’s first-half numbers should tell us a great deal as to whether the company will be able to meet its full-year targets. Revenue has been a particular problem for OnTheMarket, with expectations of around £18m for the current year. While still better than last year, this is much less than was expected a few months ago. Brexit uncertainty isn’t helping, as it’s making buyers more cautious, and losses are likely to come in at about £9.8m for the full year.

Dunelm Q1 sales
Thursday: It’s difficult not to like Dunelm. The share price has been one of the outperformers so far this year in UK retail, prompting some speculation that the good news may be priced in. These concerns could explain why the share price has started to trade sideways in the past three months. In the latest numbers, like-for-like sales rose 7.7%, while operating profits rose strongly, prompting a nice special dividend. As it continues to invest in securing its online position in homeware, there is a risk that profit might start to flatline, as profit margins shrink.

Delta Air Lines Q3 results
Thursday: In Q1 Delta returned $1.6bn to shareholders, with little sign that passenger demand was slowing. It reported a record $10.47bn in revenue, while profits jumped to $730m. In Q2 the company built on this with another record revenue beat of $12.5bn, 20% above the previous year, largely due to premium class demand. The company might have also been helped by the fact it doesn’t have any Boeing 737 Max in its fleet. There’s a lot to be said for getting on a plane and not being worried about it falling out of the sky. For Q3 profits are expected to come in at $2 27c a share, with revenues needing to come in near the levels seen in Q2 if management are to meet total full-year revenue targets of around $47bn.