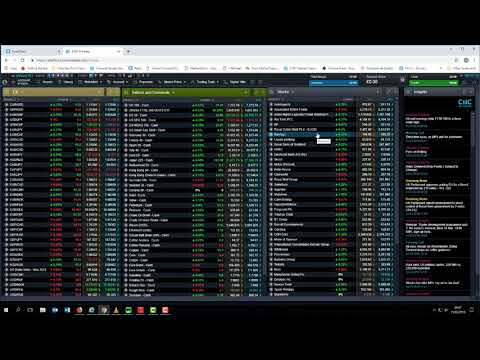 Watch our week ahead video preview (above), read our top nine stories to look out for this week (18-22 March), and view our key company earnings schedule.

Chief Market Analyst Michael Hewson looks at key levels in the FTSE 100, German DAX and S&P 500, while looking ahead to the upcoming EU Council meeting and the prospect of a Brexit extension, as well as Federal Reserve and Bank of England rate decisions, and the latest economic data.

FedEx Q3 results
Tuesday: For all the concerns about a slowdown in the US economy and differing signals around retail sales data compared with upbeat sales numbers from the likes of Walmart and Amazon, delivery services is one area which should offer an insight into how much US consumers are spending online. The latest numbers from FedEx will reveal how many parcels are being transported around the country, as more and more business moves online. Expectations are for earnings of $3.18c a share.

UK earnings & consumer price index (February)
Tuesday & Wednesday: The UK inflation outlook continues to look soft, with headline CPI at multi-month lows, while wage growth has risen to its highest levels in a decade. This trend looks set to continue this week, despite concerns that the UK economy is close to stalling. It appears that companies are spending more money on wages in order to retain staff, rather than implementing new investment programmes in the short term. Wages could rise to 3.5%, with headline CPI dropping to 1.7%.

Federal Reserve meeting
Wednesday: The recent February US non-farm payrolls report came in much lower than expected, which could be a worry if the economy is showing sharp signs of slowing. It’s probably too early to draw these conclusions however, with unemployment and underemployment both dropping sharply, and wages rising at their fastest rate since the financial crisis. Inflation is also looking quite soft. Fed officials have indicated that they are prepared to play a watching game for the time being, with Fed chair Jay Powell reiterating earlier this month that further rate rises are some way off.

Bank of England meeting
Thursday: With less than two weeks to go until Brexit, it is unsurprising that no change to monetary policy is expected this week. The Bank of England has already indicated that it is as prepared as it can be ahead of the leave date, with the next move in interest rates still skewed to the downside in the event of a disruptive exit. If we do get a deal, the outlook for the UK economy would still be uncertain given the economic weakness globally, and particularly in Europe.

Next full-year results
Thursday: The outlook for UK retail has been a difficult one for some time now; most of the headlines over the last 12 months have centred on falling profits and squeezed margins. Declining footfall in the high street has hurt those stores with large floor space footprints. Next management warned over a year ago that the retail outlook is the most difficult it’s been for 25 years, and in January, downgraded its full-year profit guidance. However, the shares have still managed to show some decent gains since then, with online sales outperforming in-store sales by a large margin. Rents continue to be an issue for UK retail, and in the absence of reductions, more stores could close.

Ted Baker full-year results
Thursday: Putting aside the departure of CEO Ray Kelvin following the negative headlines surrounding his behaviour, the company’s recent profit warning was an unwelcome reminder that despite a limited store footprint, Ted Baker hasn’t been immune to the troubles and travails of the retail sector. Profits are expected to come in at £63m, down from £74m, after the company reported it would have to write-down £5m on the value of unsold stock.

Nike Q3 results
Thursday: Having hit an all-time high in February, the glide path for Nike’s share price has been pretty much one way since its strong rebound from December lows. The shares have pulled back particularly in the last two weeks, following reports that two elite US basketball players suffered injuries due to their footwear failing. This might raise concerns about the quality of Nike’s merchandise at a time when margins are starting to come under pressure. Online sales have been a strong growth area, particularly in China, but will the recent bad publicity hurt the company’s Q3 numbers? Expectations are for earnings at $0.63c a share.

EU Council meeting
Thursday & Friday: This will be the last big meeting for EU officials ahead of the 29 March Brexit deadline, and could be the last opportunity to get the EU to rubber stamp some form of extension, or find a compromise as the clock counts down. There is no guarantee that the EU will grant an extension if there is no specific endpoint, which means the UK could be forced to choose between the negotiated deal or revoking article 50. With Theresa May set to give her battered deal another go, we could see a short extension if she succeeds, or a much longer one with lots of conditions attached if the deal fails again. EU leaders will need to tread carefully given that the no-deal option is still the default option, whatever MPs might have agreed this week.

France & Germany flash PMIs (March)
Friday: Purchasing managers’ indices from France and Germany  have largely been a tale of two halves, with services showing signs of life, while manufacturing has languished in the doldrums. However, we did some evidence of a rebound in the February numbers.

Canada retail sales & CPI (February)
Friday: The Canadian economy appears to have stalled in the last couple of months, prompting the Bank of Canada to adopt a more dovish tone at its most recent rate meeting and to remove a reference that rates might need to rise further over time. The inflation outlook still shows no signs of picking up, while consumer spending has remained muted, with retail sales declining two months in a row. This week’s inflation and retail sales numbers look set to reinforce this weak outlook.