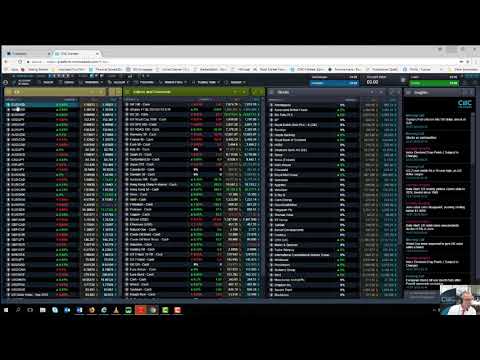 See his week ahead video, the top events to watch, plus our key company earnings schedule. Michael looks ahead to the ECB rate decision, the meeting between President Trump and Jean-Claude Juncker, plus the key levels on the DAX and EUR/USD.

Germany & France flash PMI surveys
Tuesday: Recent purchasing managers’ index (PMI) data appears to show that the manufacturing sector has been struggling since the beginning of the year. While the numbers remain broadly positive, there is concern that we might see further weakness in the months ahead, amid talk of trade wars and tariffs. Services on the other hand has been showing signs of finding a base, with a rebound in both Germany and France in June. After a month-long World Cup and with France lifting the trophy, the French services sector could be set for another boost as it continues to outperform Germany, whose team went home unexpectedly early.

ITV half-year results
Wednesday: When Carolyn McCall left easyJet, she may have felt that turning ITV around would probably be an easier job than turning a budget airline into a household name. This may prove easier said than done, however, and the sharp fall in profit at the beginning of the year will have brought the scale of the task into sharp focus. A steep fall in advertising saw its revenue decline to £1.5bn. Once again it was ITV Studios that picked up the slack, with a range of programmes from Broadchurch to Love Island that allowed it to push its total revenue up by 2%. Management will hope that the World Cup will go some way to boosting advertising in the first half of this year, though the company could miss out if the so-called ‘ITV curse’ on England games caused people to switch off. The big concern for ITV is that its programming budget is tiny compared with its rivals, and there is a worry that in order to compete, margins could get hit further. Its online offering isn’t great either, with the ITV Hub clunky to navigate.

Facebook Q2 results
Wednesday: Despite the fallout from the Cambridge Analytica privacy scandal earlier this year, Facebook was still able to post record revenue of $12bn in its Q1 update, a 50% increase from the same period last year. Over the past three months, the quid pro quo for accessing Facebook services has been the collection of far more data than previously realised, including details of a user’s browsing history even after a web page is closed. With the advent of the European GDPR directive and acknowledgment that the company needed to do more to assuage concerns about user privacy, there is a distinct possibility that we could see a delayed reaction given some of the negative publicity over CEO Mark Zuckerberg’s interactions with US and EU politicians. A slide in users and revenue could lead to a sharp reversal in the share price, which until now has proved to be fairly resilient to the company’s recent woes.

Sky full-year results
Thursday: Sky’s share price performance in recent months has been driven less by its business performance and more by a bidding war between Comcast and Disney, which has seen its share price rise over 50% already this year. When the company announced its half-year numbers at the beginning of 2018, revenue had increased by 5% year-on-year, helped by productions like Game of Thrones. Sky signed a content partnership with rival BT at the end of last year, as the business gears up to deal with the threat of Netflix and Amazon. Amazon’s entry into streaming Premier League games from the beginning of the 2019 season appears to bear these concerns out. A tie-up with Disney will certainly help in terms of content, and for the moment this seems the preferred option, as investors look at the longevity of the overall business model. Sky’s management have a big decision to make: do they go for the best bid, or take a longer-term view. If they choose Comcast, they will be backing a company which has received more complaints than any other – whereas Disney has a better reputation. Whichever way they go, Sky customers could pay with higher prices, or worse customer service – or both.

Trump meets Juncker
Wednesday: It should be an interesting meeting between the teetotal President Trump and president of the EU commission Jean-Claude Juncker, who it has been rumoured does like the odd tipple, when they meet at the White House on 25 July. Trade is likely to be high on the agenda list at a time when the US president has called the EU a “foe”, while the EU commission has promised to push back on the President Trump’s threat to impose a tax on all imports of cars from the EU.

ECB rate meeting
Thursday: We’re not expecting any surprises from this week’s European Central Bank rate meeting, coming off the back off last month’s decision to taper the asset purchase programme by the end of this year. The main focus is likely to be on whether the ECB clarifies its guidance on the timing of its first rate hike, with speculation varying between Q2 next year; the end of Q3 2019 – a time that has euphemistically been described as the ‘end of the summer’ – or at the end of Q4, after President Draghi’s term at the helm of the bank has expired.

Amazon Q2 results
Thursday: Amazon has continued to break into new markets with the recent acquisition of a small portion of Premier League football rights from the 2019 season, accelerating its advance into new areas for content and revolutionising the retail landscape. Doubling profit in Q1 this year, along with price rises in its US markets, certainly helped, while its foray into food and healthcare is only just getting started. Revenue rose to $51bn in Q1, with the prospect that Q2 could be an even better performance, despite the problems that marked last week’s Prime Day, as subscribers for Prime moved above the 100m mark at the end of the last quarter. The company has also announced its intention to launch its own smart TV with inbuilt Freeview tuner, in order to take on Sky in the pay TV market.

US Q2 GDP
Friday: January tax cuts appear to have helped light a fire under the US economy, with retail sales rising for five months in a row despite two further rate rises this year, while unemployment recently dipped below 4%. The recent US Federal Reserve minutes highlighted that the economy continued to look strong, and this week’s first iteration of Q2 gross domestic product may come in at a fairly lofty 4%.