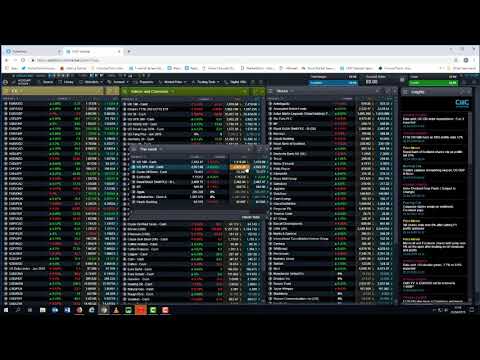 Watch our week ahead video preview (above), read our top 10 stories to look out for this week (29 April-3 May), and view our key company earnings schedule.

Chief Market Analyst Michael Hewson looks ahead to the upcoming rate decisions from the Federal Reserve and Bank of England, while also looking ahead to the latest earnings announcements from BP, Royal Dutch Shell, Lloyds Banking Group, Apple and Alphabet.

Alphabet Q1 results
Monday: Google parent company Alphabet reported revenue of $39.27bn in February, but an increase in costs caused the share price to slip back on the day, despite profits of $8.9bn. The rise in costs appears to be the result of promoting its cloud and YouTube business, while some of the higher costs came about as a result of its other business bets which doubled to $1.3bn during the year. Lyft’s recent IPO flop is unlikely to have helped the mood, given Alphabet holds a stake in the ride-sharing business. Monday’s numbers should tell us whether Alphabet has had to continue to spend money to hold off Amazon in the cloud services area.

BP and Royal Dutch Shell Q1 results
Wednesday & Thursday: Last week French oil giant Total reported a profit fall of 4% in Q1, despite record production output and average crude oil prices of $63 a barrel. The drop was attributed to a rise in debt servicing costs, as well as lower natural gas prices, and could be a ‘canary in the coalmine’ for BP and Royal Dutch Shell. Expectations for BP’s Q1 numbers on 1 May might need to be tempered. Earlier this year BP beat profit expectations, however its acquisition of BHP’s shale assets put its debt level up to $44.1bn, and this could be a problem in terms of higher costs. Its share price is up over 10% year to date. Royal Dutch Shell has a lower debt gearing, but its exposure to natural gas could hurt profit, despite average oil prices above $60 a barrel.

Whitbread full-year results
Tuesday: Now divested of its Costa Coffee business, the owner of Premier Inn will have to stand (or fall) on the back of its hotel business. But at least it still has a good proportion of the £3.9bn it received from Coca-Cola burning a hole in its pocket. This week’s numbers should be an open goal for Whitbread given the amount of people expected to stay in the UK this year, plus the hot Easter weather that brought consumers out in droves. However, it's rarely that simple and low occupancy rates have been a problem recently, despite management integrating its restaurants into the hotels package to help drive up revenue. The move into the German market has been progressing, but is likely to need significant investment which could drag on profit in the short term. This won’t have been helped by a German economy that is slowing sharply.

Apple Q2 results
Tuesday: What to say about Apple that hasn’t already been said? The company is a cash machine when it comes to selling its products, however, it’s also expanding into streaming services to take on the likes of Netflix, Amazon and Disney. The big question is how much money is the company looking to spend? It has much deeper pockets than its rivals, but its core business remains handset sales. Even Q1’s downgraded forecasts still showed revenue of $84.3bn, despite weaker demand for its iPhones. As the company no longer provides a breakdown of handset and tablet sales, it’s becoming harder to detect whether growth in this market has peaked and is a sustained move lower. Services may carry on picking up some of the slack, and should continue to do so when Apple TV+ is added in the autumn. Q2 revenue is expected to be much lower at $55bn to $59bn, with a decline in margins, after the company decided to adjust its prices lower to account for currency fluctuations in certain countries.

FOMC rate decision
Wednesday: The US central bank has come under criticism in recent months from President Trump, regarding last year’s decision to raise interest rates on four occasions. While the Federal Reserve has halted its rate-hiking cycle, this doesn’t appear to have cut much ice with President Trump or his officials. Chief economic advisor Larry Kudlow, among others, is calling for rate cuts in the face of a slowing economy. This remains highly unlikely in the current environment, with the US economy still growing in excess of 2% on an annualised basis. Wednesday’s decision is likely to reaffirm March’s downgraded growth forecasts, and also take the prospect of further rate rises this year off the table. Fed chair Jay Powell’s press conference will also be scrutinised for any indication that he thinks the Fed may have been a little too cautious in their assessment of the US economy in Q1.

Sainsbury’s full-year results
Wednesday: It hasn’t been a great year for Sainsbury’s CEO Mike Coupe; his plans for a merger with Asda have fallen foul of the UK regulator, while Sainsbury’s has also fallen to third place in the supermarket league tables. While this doesn’t include sales numbers from its Argos business, it does highlight how the rest of the sector has continued to lag behind Tesco, while young pretenders Aldi and Lidl continue to eat into their market share. The big challenge facing Sainsbury's and Asda now is what to do given the CMA has confirmed its decision to kill the merger. Sainsbury's also needs to think about winning back its place as the number two UK supermarket in terms of market share. With the shares at multi-year lows and Mr Coupe’s position as CEO under scrutiny more than ever, management will need to reassure shareholders that they have a plan B for the new financial year, especially as food retail is set to become more competitive than ever. With profit and sales set to miss expectations, shareholders might start to get restless if the share price falls below its 2016 lows, to levels last seen in 1989.

Global manufacturing purchasing managers’ indices (PMIs)
Wednesday & Thursday: There is little evidence that the global manufacturing recession is showing signs of a pickup. In the past month there has been an improvement in Chinese numbers, but this could simply be a case of playing catch-up after February’s New Year slowdown. Flash PMIs from Germany and France showed a modest improvement, but given March’s weak numbers, you would have to go some way for them to be much worse. Italy, France and Germany’s manufacturing activity all contracted in March, and April is unlikely to be much different, though an improvement would be well received.

Lloyds Banking Group Q1 results
Thursday: For most of this year, Lloyds Banking Group shares have been rising steadily, despite the bank probably being the most exposed to the prospect of a no-deal Brexit outcome. In April, the shares hit their highest levels since May last year, despite a weak end to its fiscal year. Investors appear to have finally woken up to the fact that the bank is in a fairly healthy state, having posted a statutory profit of £4.4bn at the end of last year. The bank’s biggest problem is likely to have been a slowdown in the UK economy in the first quarter, as a result of ongoing Brexit uncertainty, which is likely to have slowed its lending in the first few months of the year. Watch out for further provisions on its MBNA credit card portfolio, as well as a change of outlook given that it was predicated on “a deal and smooth Brexit transition” which would have seen the UK economy grow at circa 1-1.5%.

Indivior Q1 results
Thursday: Last month, Indivior shares plunged over 70% after the company was indicted by a US Federal jury for fraudulent misrepresentation of its Suboxone Film opioid treatment. The shares have stabilised somewhat in the aftermath, yet the outlook still looks bleak. Thursday’s Q1 update could add some extra colour to the story, but the survival of the firm still remains at risk if the charges lead to the maximum $3bn fine. If this was its only problem there might be light at the end of the tunnel, however sales from its other products have been struggling, due to competition from more generic rivals.

Bank of England rate decision & inflation report
Thursday: With the hunt set to begin for Bank of England governor Mark Carney’s replacement, there are a number of people who will be keen to glean how the central bank views the recent decision to delay Brexit, as well as the consequences that decision might have on future investment prospects for the UK economy. So far we’ve seen little indication that the economy is suffering any more or less than those in Europe, as a result of the global economic slowdown. Domestically the UK economy is holding up well, though there are concerns about rising inflation and a weakening currency. This could raise the prospect, however unlikely, as to whether the bank thinks that rates might have to rise to compensate.

US non-farm payrolls & earnings
Friday: Normal service resumed for the US jobs markets in March, after the surprise of a low February reading at just 33,000. A gain of 196,000 new jobs saw the unemployment rate fall to 3.8%, while wages growth cooled a little to 3.2%. These were still good numbers and this looks set to continue, with another 185,000 jobs expected to have been added in April, while wages are expected to tick higher to 3.3%. Overall these sorts of figures are in the ’goldilocks’ range – not too hot and not too cold, and likely to keep the Federal Reserve happy that the US economy is ticking over nicely.