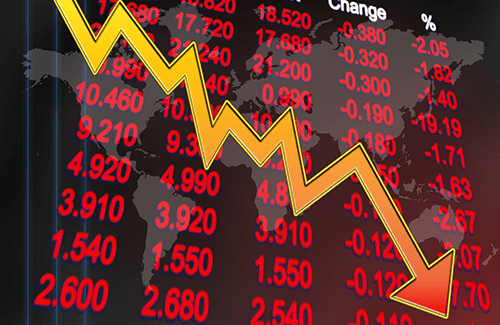 After an initially subdued start to European trading, equity markets have rolled back over into the red ahead of the weekend, bringing to an end to what initially looked like being a positive week, but which ultimately has seen the risks of a renewed escalation  in the US, China trade war come back to the fore front of investor’s minds.

Coming on the back of rising concerns about a more enduring global economic slowdown, the uncertainty has weighed slightly more on European markets with the German DAX having a terrible week, breaking back below the 11,000 level, hitting a three week low in the process, over concerns that the Eurozone economy is about to hit the rocks, after a slew of economic data this week, from across the bloc, showed little signs of any improvement.

The FTSE 100 has had a slightly better time of it this week, despite slipping back over the last two days. Earlier this week the index managed to hit a three month high, helped by some solid results from the likes of BP, and decent gains elsewhere in the basic resource sector.

This morning’s latest trading updates from French luxury brands L’Oréal and Hermes have shown that for all the doom and gloom around China there are still some bright spots. Hermes saw revenues rise by 9.6%, largely driven by sales of its Birkin bags, while sales in e-commerce also played a part, growing at a faster rate than any other geographic region. L’Oréal saw Q4 sales rise 7.7% as sales of perfumes and skin care brands outperformed.

Energy company SSE announced their latest Q3 numbers this morning, cutting guidance from 70-75p three months ago to 64p to 69p due to the recent judgement by the European Court of Justice ruling which they hope will only be temporary removal of the European Commission’s state aid approval of the GB capacity market scheme.

Management said that the ruling would reduce income by about £60m and this has seen the shares slide back a little, while an update on the company’s retail arm would come at the end of March, when the option to spin it off might well be considered.

Royal Bank of Scotland shares have continued to look soft after yesterday’s reports that the UK government was considering selling off another sizeable stake in the bailed out bank, ahead of next week’s full year results, when the bank is expected to its biggest annual profit since it was bailed out over ten years ago.

UK bookmakers William Hill and GVC shares have had a slightly softer tone in the last couple of days as concerns grow that revenues could take a sizeable hit if the shutdown of UK horse racing, due to the equine flu outbreak, continues for an extended period of time.

Ocado shares have managed to rebound a little into the weekend after two days of sharp losses as the extent of the fire at their Andover warehouse starts to become apparent. The warehouse is said to process about 10% of Ocado’s orders and the loss of this capacity is likely to result in a significant loss of revenue in the coming months. The big question is how significant this temporary loss of capacity will be for future earnings, and whether the fire came about as a result of design flaw in the technology, or is just an unfortunate one-off incident.

US markets have continued their slide today, taking their cues from the weakness in European markets, with the main focus on company earnings in the absence of any economic data.

The latest numbers from toy maker Hasbro have caught the eye, with profits coming in at $1.33c a share, well below expectations of $1.67c. Revenues were also down with the company blaming the residual effects of the collapse of Toys R Us, and a slowing European toys market for the 13% decline to $1.39bn. Its partner bands also underperformed, as merchandise from films like Star Wars, Marvel and Frozen struggled to make it out of the door. A saving grace it would appear was that management appeared optimistic about the future outlook, however that hasn’t been enough to stop the shares sliding back after initially hitting two month highs.

It’s not all doom and gloom on the travel front with Expedia shares having a good session after reporting Q4 numbers that beat expectations. Profits came in at $1.24c a share while revenues rose 10% to $2.56bn. Profit expectations for 2019 are also expected to rise by 10-15% with strong expectations for strong growth in its main brand, as well as its Hotels.com brand.

The pound has managed to hold up fairly well, despite rising concern that the UK is heading for a “no deal” Brexit, as Prime Minister Theresa May heads for Dublin to discuss the vexatious issue of the Irish backstop in an attempt to get a time limit put in so that it has a chance of getting passed through the UK parliament, when it comes back to MPs.

Markets appear to be banking on the prospect that an outbreak of sanity will break out between EU and UK politicians in the weeks and months ahead, so that a “no deal” scenario is avoided. On the evidence of the last few days, and some of the language coming out of European capitals and London that, on the face of it, seems a big ask.

After a pretty rotten week the Canadian dollar enjoyed a respite after the latest jobs report for January showed that 66k new jobs were added with both part time and full time jobs sharing the gains fairly equally. More importantly wages growth showed an improvement, rising from 1.5% to 1.8%, and while unemployment did rise to 5.8% this was largely due to a rise in the participation rate as more workers returned to the work force.

The US dollar has had a solidly strong week rising across the board despite a sharp drop in yields across the curve. US yields have fallen for three successive weeks in a row, taking their cues from the recent change of tone from the US Federal Reserve on the prospect of future rate rises in 2019. Despite this fall in yields the US dollar index is back at levels last seen at the beginning of the year, though this is more down to the currency weakness of most of its major peers.

In the space of the last few days we’ve seen downgrade after downgrade of economic expectations for Europe, the UK, India and Australia, which in turn has hit the bond yields of all of these major markets.

As we come to the end of what looks like it could be a negative week for oil prices, we’re seeing a modest rebound after the latest OPEC data showed that Saudi Arabia had reduced its output in January by 400k a day. This doesn’t look like it will be sufficient to offset concerns that a weakening global economy will start to act as a brake on demand, with US prices in particular showing the largest falls, as a stronger US dollar also weighs on the upside.

The rebound in the US dollar appears to be also weighing on the gold price which has failed to make much headway this week, after hitting an eight month high earlier this month.