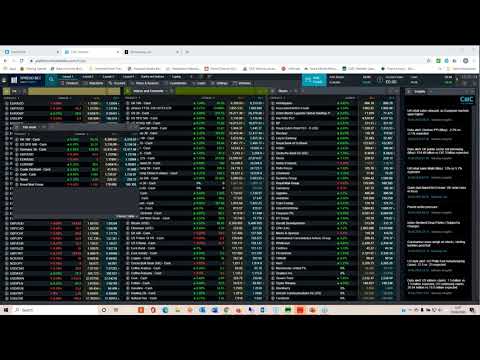 Watch our week ahead video preview, read our pick of the top stories to look out for this week (22-26 June), and view our key company earnings schedule.

Our UK chief market analyst, Michael Hewson, looks back at this week's price action in equity markets, and ahead to the latest flash PMI numbers, US economic data, and key chart levels on the FTSE 100, German DAX, S&P 500, GBP/USD, EUR/USD and EUR/GBP. He also looks ahead to the latest numbers from Tesco and Royal Mail.

Tuesday: Optimism over a rebound in economic activity gained traction in May, when there was a decent rebound from the record lows in April, as economic activity collapsed sharply in the wake of lockdown measures. April’s lows of 10.2 and 16.2 in services activity for France and Germany respectively rebounded to 29.4 and 31.4 in May. Tuesday's June numbers are expected to improve on that; with expectations of improvements into the mid 40s, of 45.5 and 41.6. This might be a touch on the optimistic side given that a lot of businesses have struggled to reopen, most notably retail as well as travel and leisure, while in the UK we economic activity may lag behind, due to non-essential shops only reopening on 15 June. As a result, UK services activity may only improve to 37.5 from 29. Manufacturing has been a lot more resilient, although with readings still in contraction territory in the mid-to-high 30s, and here we could also get a move into the mid-40s.

Wednesday: As the UK went into lockdown three months ago, Stagecoach issued a profit warning, as well as cutting its dividend, as it became apparent that the coronavirus pandemic was about to take a chainsaw to its revenues. In April, the company furloughed more than half its staff and engineers, as it became clear that the costs of running a full service without passengers was likely to bankrupt it. At around the same time, the UK government announced a bailout package allowing Stagecoach and other operators to continue to run any remaining services, without losing income. On top of this there is also a bus restart programme, which will help in phasing back bus services outside of London. Against this backdrop of government aid, it’s likely to be quite difficult to separate government help from actual income, as the UK economy tries to get back on its feet. Wednesday’s results could show a number of impairments as a result of Covid-19, which shouldn’t surpass £25m. There could also be £14m charged to expenses in respect of hedged cash flows for fuel consumption, which now won’t occur. This is likely to take a bite out of the company’s annual revenue and profit, which had already declined significantly in the first half of the year. Adjusted revenue for the first half was down 20% to £800m, and is only expected to increase by another £537m in the second half, to £1.37m. This would be a 27% decline from the previous year.

Wednesday: As the German economy reopens from its March and April shutdown, business optimism has improved. After a record low of 74.2 in April, there was a modest rebound in May to 79.5, and this should improve further in June, as economic activity continues to pick up. Bars, restaurants, sports clubs and public transport services have largely reopened, subject to mask requirements, while the German government has announced it will be implementing a range of fiscal stimulus measures, including tax cuts. This slow resumption to normal life should be reflected in another improvement in business confidence.

Thursday: Royal Mail has been one of the few organisations that has continued working throughout the Covid-19 crisis, albeit on the back of some modified working practices to ensure employee safety. If its parcels division doesn’t come out ahead of expectations, given the higher volume of online business since the lockdown in March, it will be a disappointment, despite lowered expectations. Last May, Royal Mail cut its dividend in order to free up £1.8bn over 5 years, as management look to lower costs. This could be problematic due to relations with the unions, who are likely to push back on automation. However, the departure of Rico Back as CEO might be a turning point in this regard. Management need to reconnect with the workforce, and a new executive team might be able to push through some necessary changes that need to be made for the business to stay viable. In November, the company had a target of £300m to £340m. This could be optimistic, particularly given how its letters division has underperformed as a result of the lockdown. Parcels, on the hand has the potential to help offset this.

Thursday: The Olive Garden is a perennial favourite of US diners, and while it, along with the rest of the restaurant trade, has suffered in the wake of the coronavirus shutdowns, its share price has seen a decent recovery off the March lows of $26.20. In its most recent update in mid-May, Darden said that comparable store sales had recovered to -49% from the same period a year before. With more than 65% of its store real estate open by the end of May, but with a much lower capacity in order to comply with social distancing rules, the shutdown is expected to see a 45% decline in revenue to $1.25bn, and a loss of $1.64 a share. Investors will be particularly interested in how management view the outlook, though to some extent that will be down to the US economy enjoying a decent post-Covid-19 rebound, and avoiding a second wave.

Thursday: When Nike reported its Q3 numbers in March, it was notable that while online sales were resilient, its China operations were a significant drag due to the February shutdown of the Chinese economy. Even though the Greater China stores managed to reopen in March, the company was then faced with shutdowns in the US and Europe, which are likely to hit its Q4 numbers. Against this backdrop, management unsurprisingly declined to offer any guidance for the quarter, which means it’s anyone’s guess as to the impact on its revenue and profit. The only positive could be that sector peer Adidas reported a return to growth in its China markets at the beginning of the month, while Nike also has a strong online digital presence. In terms of Q4 expectations, revenue is expected to fall by just over $2bn from the same period last year, to $8bn, with profit of $0.17 a share. The full-year consensus is for $39bn and profits of $2.18c a share.

Thursday: There aren’t expected to be too many surprises from the final US Q1 GDP numbers, which are expected to confirm a -5% contraction in the first quarter. This is slightly worse than the initial -4.8% reading a few weeks ago, but also understates where the US economy is right now. In the last few weeks, weekly jobless claims have slowly come in lower than the previous week, but always at levels in excess of 1m jobs per week. Continuing claims have started to become the data point to watch, in the hope these will start to come down below the 20m level, after peaking at just over 25m at the beginning of May.

Thursday: The last time these stress tests were conducted, the worst-case scenario was a US unemployment rate of 10%, and a US economic contraction of a similar level. We are way beyond that now, and while US banks have suspended dividends and buybacks, they also increased their provisions in respect of non-performing loans in their most recent trading updates, to the collective of tune of nearly $25bn. These loans are likely to be across a range of businesses, from under pressure shale producers to hard-pressed consumers, who may have to seek forbearance on mortgages and other credit losses, as the unemployment rate sky rockets to levels last seen in the 1930s. The Federal Reserve has backstopped the financial system by providing additional funds, however this is unlikely to prevent widespread defaults, particularly in the travel and leisure sector.

Friday: When Tesco reported its full-year numbers in April, there was some criticism that it was paying a dividend to shareholders while benefiting from a business-rates tax cut, along with a host of other measures designed to help the hard-pressed retail sector ride out the coronavirus lockdown. This may be a valid criticism, but Tesco, along with the rest of the supermarket sector, has faced challenges of its own as a result of the crisis, albeit ones of a different degree. A sharp rise in costs, of between £650m and £1bn, along with the risks to its staff of staying open to feed the nation, has presented its own challenges not only to its supply chain, but its ability to meet and boost its online, as well as physical delivery targets, in response to huge jumps in demand. Last week's news that Tesco has sold its Polish business for £181m means it has shed one of the key drags on profitability. One advantage Tesco does have is the size of its stores, which makes social distancing a little bit easier, and helped boost its sales by 11.7% in the latest Nielsen data for supermarket stores, outpacing Aldi in the process.

US personal spending (May)

Friday: In March, US personal spending slumped sharply to a low of -7.5%, as headlines started to reach US shores about the rising global death toll of Covid-19, and that was even before the US economy went into full lockdown. This number got worse in April, with a new record low of -13.6%, as the US economy shut down for the month. In the wake of the economic reopening in May, and the surprise rebound in the May job numbers, there is an expectation of a modest recovery in spending, with a 5.1% rise expected. This rebound in US jobs numbers is also likely to show a big rise in personal income data, which has started to reverse as lower paid jobs get recounted into the numbers.