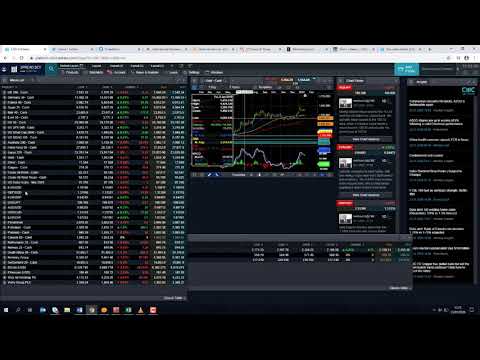 Watch our week ahead video preview, read our pick of the top stories to look out for this week (27-31 January), and view our key company earnings schedule.

In this week's video, UK market analyst, David Madden, discusses the Bank of England and US Federal Reserve interest-rate meetings, uncertainty in the markets over the coronavirus, and all the major earnings reports from the likes of Apple, Microsoft and Tesla. You can also read analysis and previews below from chief market analyst, Michael Hewson.

Monday: Is the recent recovery in German purchasing manager indices real, or just an illusion? Recent IFO business surveys have shown that there is some optimism out there, with the index hitting a six-month high in December. Can this positive trend continue in 2020? We’ll find out Monday.

Tuesday: The last two months for UK consumers have been tough, with the political uncertainty at the end of 2019 adding to what has been a traditionally crucial period for the UK economy. Retail sales in November and December were disappointing – an unusual state of affairs in the period just before Christmas. Now that the fog of political uncertainty has cleared, could we get a new year rebound? If we do see an upturn in January, it might be enough for the Bank of England not to cut interest rates when it meets later this week.

Tuesday: This will be the first quarter where we’ll get to see how much interest there has been in Apple TV+, as the company takes on Netflix and Disney+ in the streaming space. In its last quarter, Apple reported slowing iPhone sales, while simultaneously pointing to increased revenue from its services division, as well as a rise in sales from its AirPod accessories. In Q4, the company’s net profit declined by 3% to $13.7bn, despite a rise in revenue to $64bn. In total, 2019 revenue was $5bn lower than 2018, at $260.2bn, which might suggest that revenue forecasts for 2020 could be on the optimistic side, at $276bn. If iPhone sales continue to slow in 2020, then Apple will need to shift a lot more product elsewhere to offset missing out on the higher margins for its phones. In Q4, services and accessories generated $12.5bn and $6.5bn respectively, so investors will be looking for this particular area to continue to show decent growth, as consumers keep their existing iPhones longer.

Wednesday: Recent headlines haven’t been good for Boeing, and its Q4 numbers aren’t likely to improve sentiment. Reports that Boeing is looking to borrow $10bn, along with a $9.5bn credit line, has seen its share price come under further pressure in the last few days, particularly after it became clear that the 737 MAX is a long way from being declared airworthy. It’s hard to feel any sympathy –  having seen the company blow over $43bn on share buybacks in the last six years, its woes are entirely self-inflicted. To make matters worse, its pursuit of profit over safety has now morphed into a crisis of confidence with pilots and crew. If Boeing’s employees have concerns about using the aircraft, how can the company expect passengers to do so? In days gone by, pilots used to say ‘If it’s not Boeing, I’m not going’. In a complete reversal, they, along with passengers, are now more likely to be thinking ‘If it’s Boeing, I’m not going’. Boeing has a long way to go, given recent email disclosures, to restore trust. Investors may have to face up to the reality that the 737 MAX may never fly again, with all the costs and lost orders that might entail.

Wednesday: The Federal Reserve appears to have very little to be concerned about with the US economy. US consumer spending seem to be holding up, and while manufacturing continues to look feeble, this weakness isn’t just confined to the US. The recent US-China trade agreement has already seen some evidence of a pickup in manufacturing elsewhere around the world, and there could also be a boost from the signing of the US-Mexico-Canada agreement (USMCA). The Fed’s biggest problem right now is around its repo operations, which appears to be helping push US stock markets to all-time highs. Fed chair Jerome Powell is likely to face questions around how the central bank intends to deal with these problems going forward.

Wednesday: Microsoft hit the headlines earlier this year for committing to becoming carbon negative by 2030. Having recently become one of many tech giants to hit a $1trn valuation, the company’s transition from PC hardware and software to cloud technology has helped turbocharge revenue in the past few years. Its cloud business, Azure, has been the standout performer driving this growth, and pushing its annual revenue beyond a record $130bn. This is significant revenue growth when you consider that at the end of 2017 the company had revenue of $96.5bn. This equates to an average growth above 13%. Profit for Q2 is expected to come in at $1.32 a share.

Wednesday: The turnaround in Tesla’s share price in the past four months has been nothing short of astonishing. Trading at just above $210 a share in mid-September last year, the shares hit just shy of $550 earlier this month, passing the now infamous $420 level which became synonymous with Elon Musk’s famous tweet, where he spoke of securing funding to take the company private. In April, it looked doubtful Tesla would get anywhere near its annual target of 360,000 to 400,000 cars for 2019, after a poor first quarter. However, due to a positive Q3 with 97,000 deliveries, there is a good chance that the company may squeak inside the lower bound of its range target of 360,000 deliveries, which would be a new record, with the Model 3 leading the way. If Tesla can deliver anywhere near 100,000 cars in Q4, it will meet its target. The recent opening of a China factory could turbocharge production further in 2020, having already helped propel the share price through the $500 level, burning pretty much every single short position on the way up. Wednesday’s earnings will go some way to vindicating Elon Musk’s optimism of early last year, though whether it justifies the company’s rather rich valuation is another matter. On current valuations, Tesla is worth $92bn, putting it on a par with Volkswagen, and over twice the valuation of Ford.

Thursday: In the wake of last month’s Conservative election win, BT shares enjoyed a welcome rebound to a two-month high, as investors heaved a sigh of relief that the company wouldn’t be at risk of having its Openreach division hived by an incoming Labour government. Since then, the shares have dropped like a stone as it strives to roll out fibre broadband to 4m premises by 2021. At its last half-year trading update, revenue fell 1% to £11.47bn, though it managed to keep full-year guidance unchanged. Questions remain as to how BT will be able to fund future investment into 5G as well as fibre optic, without cutting the dividend or increasing its debt levels.

Thursday: At its last earnings update, Royal Dutch Shell surprised the market by citing a 15% slump in profit for Q3, from $5.6bn in 2018, to $4.8bn. In December, the company also said there will be an impairment charge of between $1.7bn and $2.3bn. Shell also cut its capex guidance to the lower end of $24bn to $29bn. This reduction in profit and the impairment appears to show that management underestimated how much weaker oil prices would be in the latter part of the year, as well as underestimating future demand for oil, along with its by-products. This is unlikely to have changed in the weeks since then, despite recent spikes in prices due to tension in the Middle East. The biggest problem for large oil companies is their reluctance to take more than baby steps when it comes to renewables, especially during a time when climate change is becoming mainstream. Share price performance has also been disappointing these past few years, as more investors rotate out of the big energy producers. The full-year numbers are likely to present a challenge to a sector that is becoming less in tune with the environment around it. The world is pulling away from big oil as an investment case, and the major oil players will need to commit more to renewables to keep the climate activists at bay.

Thursday: Recent disappointing economic data has raised expectations that the Bank of England could cut interest rates this week, from 0.75% to 0.5%, over concerns that the slowdown at the end of 2019 has spilled into the early part of this year. It’s certainly true that some of the data has been weak, however, there have been some signs that we could see a pickup in the weeks ahead. A Deloitte survey of company CFOs showed a decent rebound in business sentiment in the immediate aftermath of last month’s election. While one survey doesn’t make a trend, there are other reasons for the Bank to hold fire. A new Budget is due on 11 March, while average earnings are above 3% and unemployment is at just 3.8%. A 25bps rate cut at this stage would largely be cosmetic; the equivalent of firing a blank. Rate cuts for the sake of being seen to be doing something are not the way a central bank should implement monetary policy.

Thursday: The US economy managed to grow slightly faster in the third quarter than in Q2, coming in at 2.1%. The slowdown in the manufacturing sector, coupled with the General Motors strike, could have hit the economy in Q4. However, with unemployment still at 50-year lows and wage growth trending in or around 3%, anything around the 2% level is likely to be well received, and unlikely to give Fed officials sleepless nights.

Friday: There has been a pickup in eurozone CPI inflation in recent months, with both the headline and core number now at 1.3%. This will be welcome news for the European Central Bank (ECB), at a time when it’s undergoing a strategic review of its mandate. The recent upturn in economic activity appears to have helped drive the recovery in inflation from lows of 0.9% a few months ago. This recovery is just as well, given that the ECB is already at the limit in its scope for any further monetary policy easing.