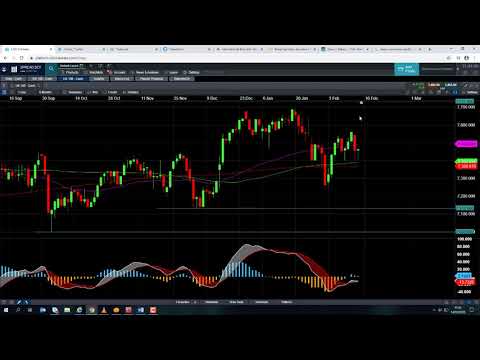 Watch our week ahead video preview, read our pick of the top stories to look out for this week (17-21 February), and view our key company earnings schedule.

In this week's video, UK market analyst, David Madden, previews the coronavirus situation, the jump in the pound after the unexpected appointment of Rihsi Sunak as UK chancellor, and the major events of the week.

Monday: Concerns about the US-China trade relationship have weighed on BHP’s share price since last summer, with the recent coronavirus crisis also having an adverse impact. In July 2019, the stock reached its highest level in five years, as traders had high hopes for August’s full-year figures. The annual numbers showed a 2% rise in underlying profit, but that fell short of analysts’ consensus forecast. The mining titan paid out a record dividend as a way of saying thank you to shareholders following the lean times in late 2015 and early 2016, when metal prices tumbled and the firm had to undergo major restructuring. As part of the reorganisation of the group, BHP sold off its shale assets to BP for $10.5bn. The transaction was completed late November 2019, with the cash being used to firm up the group’s balance sheet. Since then, the underlying oil market has fallen roughly 20%, so things have gone in BHP’s favour. Earlier this year, the US and China signed phase one of their trade deal, which should help the group, but dealers will be listening out for forecasts concerning the health crisis.

Tuesday: HSBC posted an 18% fall in third-quarter profit-before-tax. The bank derives the vast majority of its revenue in Asia, so economic cooling in China and Hong Kong’s political protests caused problems for the group, but the region “held up well” considering the landscape. Interim CEO Noel Quinn said the performance in Europe and the US was ”not acceptable”, expressing a desire to trim the headcount – having already announced plans to cut 10,000 jobs in October. The finance house cautioned about “significant charges” in Q4, with the global banking sector under pressure from the low interest-rate environment. In the latest quarter, the net-interest margin rate slipped to 1.59%, down from 1.67% in the same period last year. Central banks around the world are unlikely to be hiking rates any time soon, so HSBC could find its lending business under strain for the foreseeable future. The London-listed bank is also likely to suffer as a consequence of the coronavirus crisis. In November, HSBC confirmed plans to expand its private banking business in Asia. It’s not uncommon for banks to focus on other areas to diversify away from trading the financial markets, as well as lending.

Tuesday, Wednesday & Thursday: The UK economy is largely in good shape. The unemployment rate is on a par with 1970s levels, while earnings are growing at a faster rate than inflation, so workers are receiving a nice increase in real wages. Those who earn more tend to spend more, though there is evidence to suggest that political uncertainty in the UK has curtailed spending and investment. The headline consumer price index (CPI) inflation rate has dipped to 1.3%, while the retail sales report for December showed a fall of 0.6%, which was disappointing considering it included the crucial Christmas period. The Conservative party’s election victory and pro-business stance has raised expectations that we should expect policies that help to stimulate the economy in next month’s Budget. The UK has entered a transition period after leaving the EU, which involves staying in step with it, so spending and investment might remain subdued until the post-transition period relationship is mapped out.

Wednesday: Demand is robust in Canada, with the consumer price index (CPI) rate at 2.2% and unemployment falling back to 5.5%. Average earnings have increased to above 4%, far higher than the CPI rate of 2.2%, so workers are getting a good increase in real wages. At the last Bank of Canada (BoC) meeting, rates were kept on hold. BoC chief, Stephen Poloz, indicated that he was open to the idea of cutting rates, should economic uncertainty persist. Mr Poloz commented on the trade tensions, which should fade away after the US and China signed a phase-one trade deal. Canadian cities, such as Toronto, have a housing bubble, so the central bank probably doesn’t want to make that situation worse. The coronavirus crisis has hammered the oil market, as traders are worried that Chinese demand will dwindle, and it’s the largest energy importer in the world. The oil price slump has weighed on the Canadian dollar, so headline inflation in Canada might tick up due to the softer ‘loonie’.

Wednesday: The Federal Reserve kept interest rates on hold in late January, in line with forecasts. The themes from the first meeting of 2020 were very similar to the final meeting of 2019. The US central bank was a bit firmer on its commitment to getting inflation to 2%, and don’t see that level as a ceiling. Fed chief, Jerome Powell, said the Fed is not satisfied with the cost of living running below the 2% mark. Its preferred measure of inflation, core PCE, is currently at 1.6%. The Fed also expressed concern about trade tensions and the coronavirus situation. The central bank cut rates three times in the latter half of last year, and seems content to sit back for the time being. The minutes should provide more detail as to why the Fed maintained rates last month, but are unlikely to highlight any new information to suggest that policy could change anytime soon.

Thursday: Lloyds revealed a third-quarter statutory loss-after-tax of £238m – a stark difference from the £1.42bn profit in the same period last year. The bank posted a pre-tax profit of £50m, comfortably short of the £163m forecast. The bank’s profit in the three-month period was essentially wiped out as it made yet another provision for the mis-selling of payment protection insurance (PPI), worth £1.8bn. Lloyds has been by far the worst offender in terms of PPI provisions, with total costs exceeding £21bn. After last August’s deadline to claim for PPI, it would seem Lloyds can now draw a line under the fiasco, but as we saw with the credit crisis, provisions can keep rolling. Even when you strip out the PPI cost, Lloyds still underperformed, with underlying profit of £1.82bn below the expected £1.98bn. Impairments relating to corporate lending were cited for the miss. The hit seems to have been a one-off, but the timing isn’t ideal when you consider the PPI charge. Net interest margin for the three-month period was 2.88%, an annual decline of 0.05%. Given the moves in gilt yields in recent months, it’s not a surprise that lending margins are under pressure. The cost-to-income ratio crept higher too, but the firm now expects annual operating costs to be below the £7.9bn guidance. The yearly cost-to-income ratio is tipped to drop below the 2018 level. With lending margins squeezed, Lloyds will need to trim expenses to keep things ticking along.

Thursday: Anglo American had a strong first half thanks to a stellar performance in the iron ore division – earnings at the unit increased fourfold as the group posted a 19% increase in earnings. To celebrate, the miner confirmed a share buyback scheme of $1bn. The company has been generous to shareholders in recent years, as a way of thanking them for the lean times in 2016, when the firm suspended its dividend. Back then, the metals market was under major pressure, so mining firms had to tighten belts and boost balance sheets. In 2017, the company reinstated its dividend and has since returned $3 billion in dividends, which seems excessive bearing in mind the group’s net debt position of $3.4bn (as of July 2019). The industry has recovered greatly from the lows of 2016, but Anglo might be running the risk of falling into the old trap of making sizeable cash returns to investors, while simultaneously servicing high debt repayments. The coronavirus has clobbered the underlying minerals markets on fears that China’s demand will be dampened, so traders will be keen to gauge Anglo’s outlook.

Friday: The UK, France, Germany and US all announce flash manufacturing and services PMI reports. The European and US economies are broadly showing signs of improvement. Manufacturing in the euro-currency bloc has been under pressure for some time, especially from Germany, though it seems to have bottomed out, while the eurozone’s services sector is showing modest growth. There are some early signs the UK economy has picked up in the wake of December’s general election. Services data was its strongest in over a year, while manufacturing also improved. The UK services industry accounts for roughly 80% of economic output, so a boost to the industry is a major boon to the UK economy. The US economy is in even better shape, with both services and manufacturing ticking along nicely. The phase-one trade deal with China should offer a further fillip to business activity.

Friday: In November, Deere predicted that agricultural equipment revenue will decline by 5-10% in 2020, while revenue from construction machinery could fall as much as 15%. The group blamed “lingering trade tensions” for the poor outlook. It’s surprising the firm has such a negative forecast for the construction business, as the US housing sector is in reasonably good health. The company posted mixed third-quarter quarter figures, as earnings per share came in at $2.14, which was a fall from the $2.30 in the same period last year, but above the consensus estimate of $2.13. Revenue increased by 5% to $9.89bn, which topped the $8.43bn consensus. November’s downbeat forecast might not come to fruition though, after China pledged to purchase tens of billions of dollars’ worth of US agricultural goods in the next few years, which should boost the farming sector.