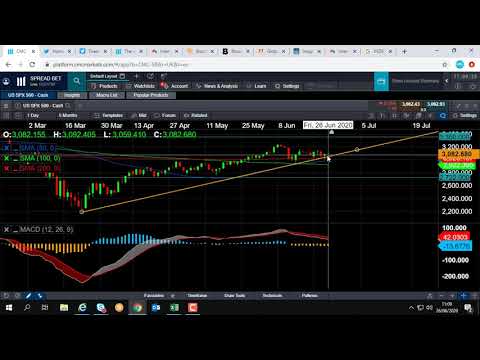 Watch our week ahead video preview, read our pick of the top stories to look out for this week (29 June-3 July), and view our key company earnings schedule.

In this week's video, our UK market analyst, David Madden, looks at the rise in Covid-19 cases and US bank stress tests, and the major events ahead, including US non-farm payrolls, Federal Reserve minutes, global PMI reports, and Q1 numbers from Sainsbury’s.

Tuesday: Tuesday’s final Q1 GDP numbers are unlikely to tell us anything new about the UK economy’s performance at the beginning of the year. The economy was slowing even before the March lockdown, largely due to widespread flooding in February, which hit consumer spending. On a quarterly basis, the economy is expected to contract by -2%, and on an annual basis by -1.7%. The lockdowns that started across Europe in March are expected to result in big declines in both imports and exports, which are expected to fall -10.8% and -5.3% respectively.

Tuesday: FedEx suspended its full-year outlook in March, citing the significant impact of coronavirus, despite posting an increase in quarterly revenue that beat market expectations. The loss of its Amazon contract was a big blow earlier in the fiscal year, however revenue still remained fairly resilient. On the flip side, the enforced shutdowns have seen an explosion in online shopping, which should translate into a significant pickup in deliveries across all of its regions. Even in freight you would expect to see a rebound, as companies safeguard their supply chains. This should see profit come in above Q3, with expectations of $1.87 a share, up from $1.41.

Wednesday: With the Japanese economy just coming out of a state of emergency at the same time as fluctuating infection rates, it’s hard to get a gauge of how business optimism is likely to change in the months ahead. This week’s latest Tankan survey will have to deal with the prospect that economic activity could take a lot longer to return to normal, with the possibility that the  postponement of the Olympics to 20201 could turn into a wholesale cancellation, unless the Japanese government can get on top of the wider infection rate. All of the main surveys are predicted to see even larger declines than in the first quarter, though remaining well above the worst levels in the wake of the 2008 financial crisis, with manufacturing much more pessimistic than the non-manufacturing surveys.

Wednesday: Supermarkets have been one of the few businesses that have managed to avoid the worst of the coronavirus pandemic. While supermarket peer, Tesco, attracted criticism for not deferring its dividend, Sainsbury’s was slightly more cautious when it released its full-year numbers at the end of April, deferring a dividend decision until the end of the year. A £500m increase in costs has offset the spike in grocery sales as a result of panic buying in March and beginning of April, while additional safeguarding measures for its staff has also acted as a headwind. That spike in sales continued into May with an 11% rise in sales year-on-year, as shoppers gravitated towards the big two supermarkets on the basis of a wider range of products and bigger spend. It also helped that Sainsbury’s online operation, due to its Argos acquisition, has a lot more resilience, but there are still weaknesses in its proposition. Unlike Tesco, it has held on to its bank, and with a tough macroeconomic outlook that could be a drag on profitability, though it does have the added cushion of a £450m saving in business rates. It’s clear that Sainsbury’s new CEO, Simon Roberts, will need to do a lot better than his predecessor if he wants to close the gap with Tesco in the years ahead.

Wednesday: Having been lauded for both its medical and fiscal response to the coronavirus crisis, Germany has been fortunate that the economic damage in terms of unemployment appears to have been limited. Since March, unemployment has only risen from 5% to 6.3%, which seems extraordinarily low when you consider the economic damage wrought across Europe in recent weeks. Over the last two months, claims for unemployment have risen by 610,000, which in a country of 80 million seems on the low side, and these figures could escalate in the coming months.

Wednesday: The manufacturing sector has proved to be much more resilient than the services sector, even though it has still suffered from the economic shutdowns of the past few weeks. Any rebound here is likely to be muted, given that services activity remains subdued. Backlogs of existing products, such as unsold cars and other manufactured products, will need to be worked off before manufacturing can restart in earnest. There should be improvements from the levels in May, if last week’s flash PMIs from the US, UK, Germany and France are any guide.

Wednesday: The closure of bars, pubs and restaurants will have hit sales across all of its brands, even accounting for increased sales from supermarkets, off-licences and liquor stores, as a result of the various lockdowns. In March, Constellation Brands pulled its guidance for the upcoming year in the wake of the uncertainty over coronavirus, despite beating Q4 earnings. The company is also behind Corona beer, which has seen sales fall over its name association with the virus. A particular drag on its profitability was its stake in Canadian cannabis company, Canopy Growth, after it posted a full-year loss of $576m. To offset this, Constellation CFO Gareth Hankinson said the company expects to receive $850m from the sale of Gallo Wines. Despite lockdowns globally, Q1 profit is estimated to come in at $2.10 a share.

Wednesday: The US Federal Reserve rate-meeting in June turned out to be every bit as dovish as expected. Fed chair Jay Powell expressed particular concern about inequality, which he said could continue for the next four decades, and that millions of people could be out of work for some time. Against such a dark outlook he went on to say that it wasn’t the Fed’s role to care about asset prices and whether they were too high, saying the central bank’s main role was to support the US economy and keep the financial system afloat. Despite some encouraging economic data since the 10 June meeting, Mr Powell has remained insistent that it’s too early to draw too many conclusions this early in the crisis. Wednesday’s minutes should offer insight into the discussions over various measures taken by the FOMC, including their concerns about a second wave and the health of the US banking system. In the face of consumer and business defaults, it will be interesting to discover whether there was any discussion over the recent surprise intervention in the corporate bond market, which many considered unnecessary.

Thursday: After the loss of a record 20m jobs in April, expectations were high that May’s non-farm payrolls report would produce further job losses in the millions. This turned out to be far from true, as the numbers for May confounded expectations with 2.5m jobs added, breaking another record for jobs gained in the process. We’ve seen significant divergence in the wider health of the US economy and ergo the labour market in recent weeks. It would appear that the return of furloughed employees in May helped dilute the effect of the mass job losses in April, with the resulting upturn in some of the consumption data, like retail sales, pointing to a decent economic rebound. The big question is whether this rebound can continue into June, at a time when continuing claims remain stubbornly high, close to the 20m level. Expectations are for this trend to continue, not only in the official non-farm payrolls, but also in the ADP report, which is due on Wednesday. Estimates are for 3.6m jobs to be added back to the US labour market in Thursday’s non-farms, with the ADP report predicted to show job gains of 2m. The unemployment rate is expected to fall back to 12% from 13.3%.

Friday: After the horror show of the recent record low levels in April’s services purchasing manager indices (PMI) numbers, there’s been a steady recovery, with the rebound in May expected to gain further traction in the June data, as the various economies continue their reopening processes. Last week’s flash PMIs from Germany, France and the UK would appear to bear this out, despite concerns about a second wave of infections prompting some concern. The biggest fear remain around the tourism sector for Spain and Italy, who rely so much on tourism in their services sector, and who are accelerating the opening of their economies to try and generate some form of revenue this year. The flash PMIs showed a continuation of the improvements from May, and are expected to come in at 50.3, 45.8 and 47 respectively for Germany, France and the UK, though there could be upward adjustments. Spain and Italy are also expected to improve from 27.9 and 28.9 respectively in May, but the figures won’t change the prospect of a significant economic contraction in Q2.

Barratt Developments share price is likely to remain under pressure as the group will not press ahead with a special dividend of £175 million that was payable in November 2021.

After the impact of the Covid-19 lockdown, Barratt hoping its share price can build on it’s full-year results

The week ahead: US non-farm payrolls; Barratt, DocuSign, Zoom results

Watch our week ahead video preview and read our pick of the top stories to look out for this week (31 August - 4 September).